The weather forecast had been a bit alarming with heavy showers forecast for 18.00hrs at Dunstable Downs on Friday 22nd May; that was the time for our 'Loop-the-Loop in a Glider' challenge. However, at the last minute the forecast was for dry conditions much to the relief of the fourteen volunteers who had arrived at the London Gliding Club to face their challenge.

At the last minute there was a report that there would be a delay of up to one hour because the local airspace had been closed as a safety precaution while the authorities exploded a bomb, found the day before at Wembley, in a nearby quarry. After a small bang was heard in the distance the all-clear was given!

We had two tug planes and four gliders to take our volunteers up to 2000 feet under tow, before the gliders were released to perform a loop-the-loop. In fact many flights performed several loops and other aerobatics before returning to the airfield. The challenge was to raise funds in support of our 'Hazel's Ambulance Appeal', set up in memory of the wife of Rotarian Brian Stuart who passed away in November 2014 at Willen Hospice.

Rotary District Governor Jenny Muir was the first up to take the challenge, and could not stop smiling when she landed. She thought it was a wonderful experience but a bit scary. The remainder of our intrepid volunteers too enjoyed the challenge; thank you to all of them for their brave efforts. The event raised the fantastic sum of £5,400

A big thank you to the Inner Wheel Club of Wolverton which held a social evening in November at the National Badminton Club, to raise funds for the ambulance appeal. The entertainment was provided by 'We Three' who performed favourite songs and monologues. 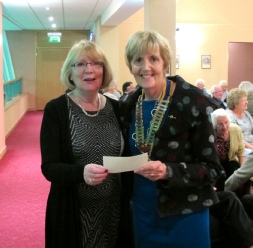 Pictured above is Inner Wheel Vice-President Viv Love presenting a cheque for over £550 to Rotary President Ann Waters.

Quizzed up for the Appeal

Rotarian Alan Harradine is well known for his quiz competitions so it was no surprise when he volunteered to run one for the ambulance appeal. Thank you to all who entered the competition and helped our appeal fund to the tune of £750. 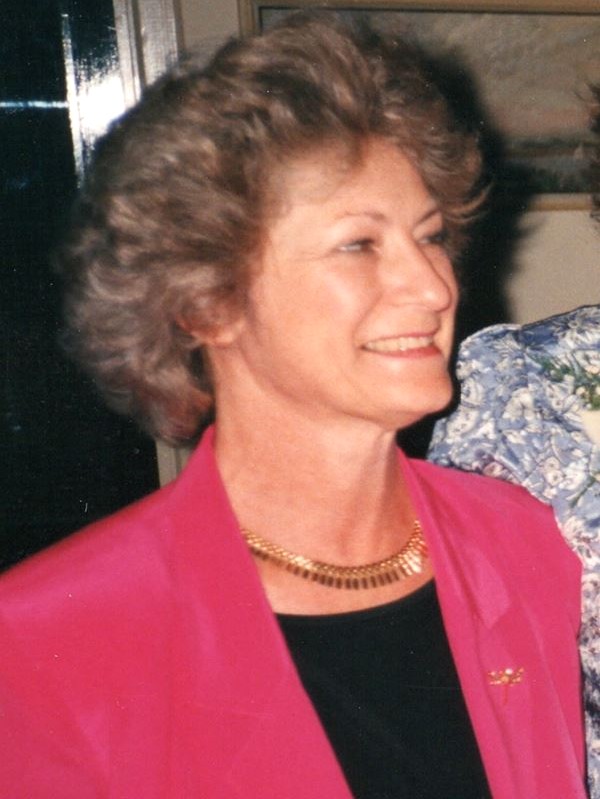 .
Fantastic news, we have done it! We have reached our target of raising £34,000 for a brand new ambulance for Willen Hospice. So successful has been the appeal that we have just over that amount; the surplus can be used to help the hospice with some of the vehicle's running costs in its first year of operation.
.
The new vehicle was handed over to the hospice at a special ceremony on 26th February 2016. see full details at http://www.wolvertonandstonystratfordrotaryclub.co.uk/index.html
.
Rotarian Brian Stuart's wife Hazel died peacefully on 10th November 2014 in Willen Hospice from cancer. The care and love Hazel received there was wonderful and Brian and his family wanted to thank the hospice with a donation, as its so dependent on gifts to fund its work.
. 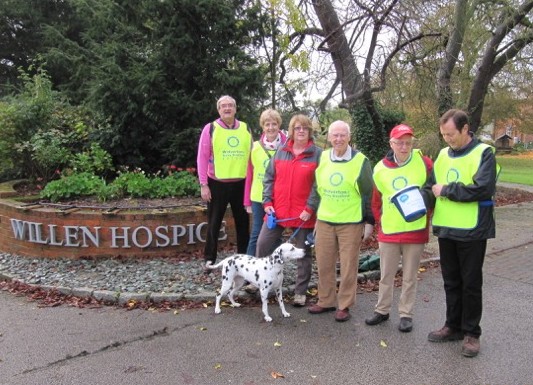 What started for Brian as a simple sponsored walk around Willen Lake in Milton Keynes quickly developed into something much more.  Initially Brian thought he would be joined by his immediate family, but then some of his neighbours decided to walk with him. Then his Rotary club colleagues also decided to join in with the walk. In the end over twenty people, plus a couple of dogs, accompanied Brian on four laps around the lake on the morning of 22nd November to achieve his target of five miles. Brian then sneaked in an additional two laps of the lake during the afternoon to meet an additional sponsorship target from his sister. In total, with the support of family and friends in England and Singapore, over £7,000 was raised.

Pictured above is plucky 79 old Brian, surrounded by fellow club members Jim, Ann, Sue, Malcolm and Chris, shortly before they set off on their walk with their collecting tins.  They were joined by Brian's family, President Bob, Allan, Glen and John (lap counter)

Wolverton & Stony Stratford Rotary Club then decided that this was a really worthy cause and a fitting memory to Hazel, and approached Willen Hospice to see if there was a project that Brian and his club could undertake. The Hospice replied that early in 2016 they would need a new ambulance, which would cost £34,000, fully fitted out to treat terminally ill patients in their homes. The Rotary Club agreed and committed to raise the balance of the funds needed.

The aims of purchasing a new ambulance for the hospice are to remember Hazel's life and her friends, to thank Willen for the loving and skilled care she received from the staff, to promote Rotary and encourage people to join our Club for its friendship and good deeds.

A special evening attended by over 70 members and distinguished guests, including Deputy Mayor of Milton Keynes, Councillor Keith McLean, and Councillor Ansar Hussein, Chair of Wolverton & Greenleys Town Council, was organised by our club to mark its official launch of a major fundraising appeal to buy a new ambulance for Willen Hospice.

"Our club had no hesitation in supporting fellow Rotarian Brian Stuart when he put forward the proposal as a way of saying 'thank you' to the hospice for the wonderful care his late wife Hazel received at the end of last year", said Rotarian Bob Russell. We have set ourselves a target of £34,000 which will be raised from various events throughout the year.

Our Christmas float collections during December 2014 raised a record sum, and helped Hazel's Ambulance Appeal to the tune of £4,000. Well done to all our collection helpers, to the stores which allowed us to collect on their premises and to the general public who gave so generously. 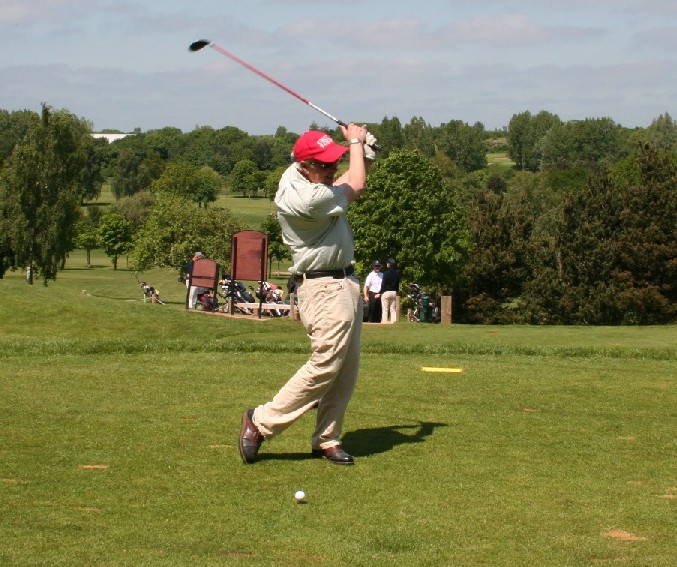 Fourteen teams entered this year and were blessed with a lovely sunny day. Over 80 people attended the evening meal, auction and prize giving ceremony. Thanks to all the golfers, our generous sponsors, to our helpers & Abbey Hill for hosting us" said organiser Rtn. Malcolm Poulter. 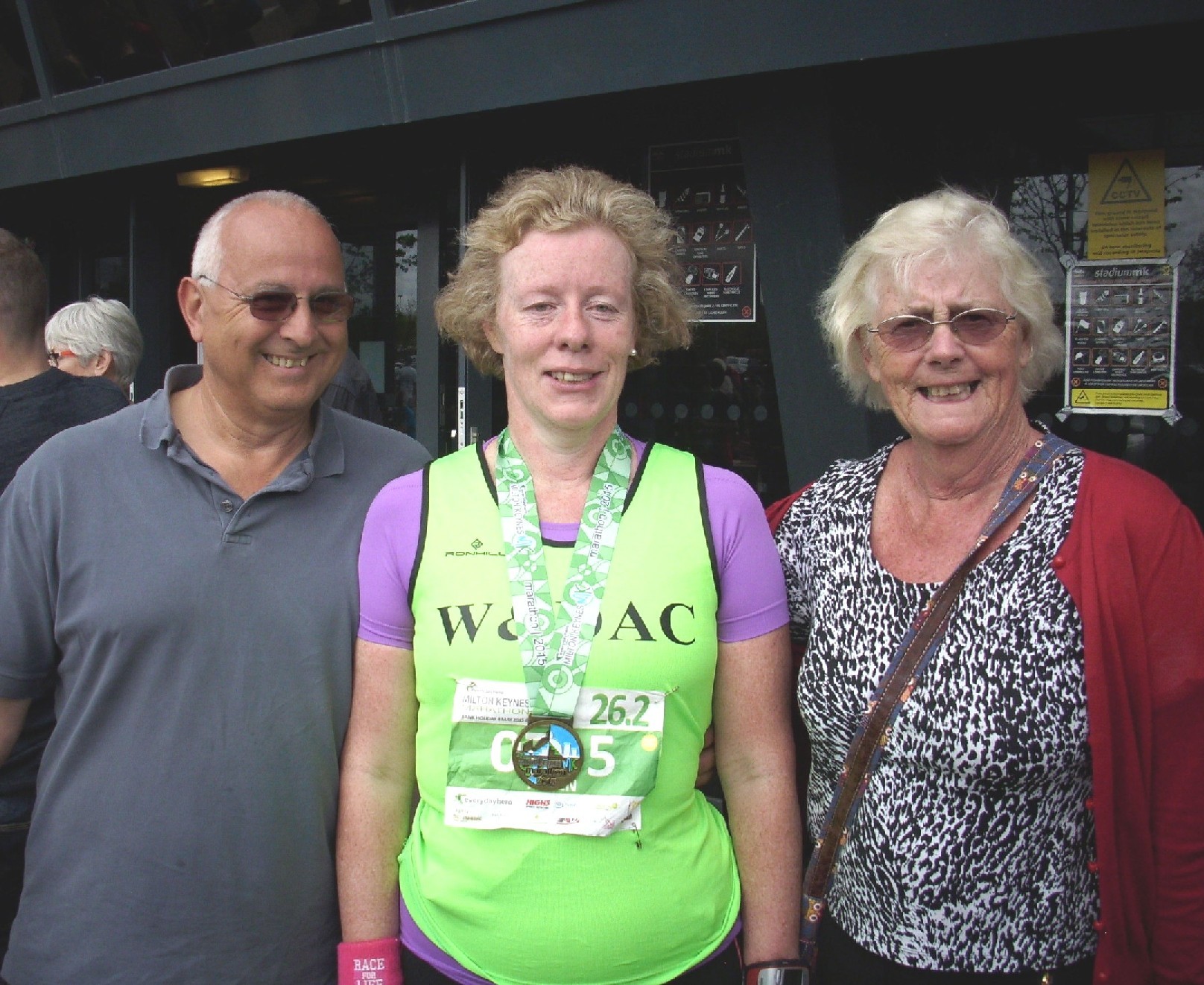 Congratulations to Rotarian Karen Lower, pictured above with husband Peter and Mum, after completing her first Milton Keynes Marathon on bank holiday Monday 4th May 2015. Her sterling effort raised over £380 for the ambulance appeal. 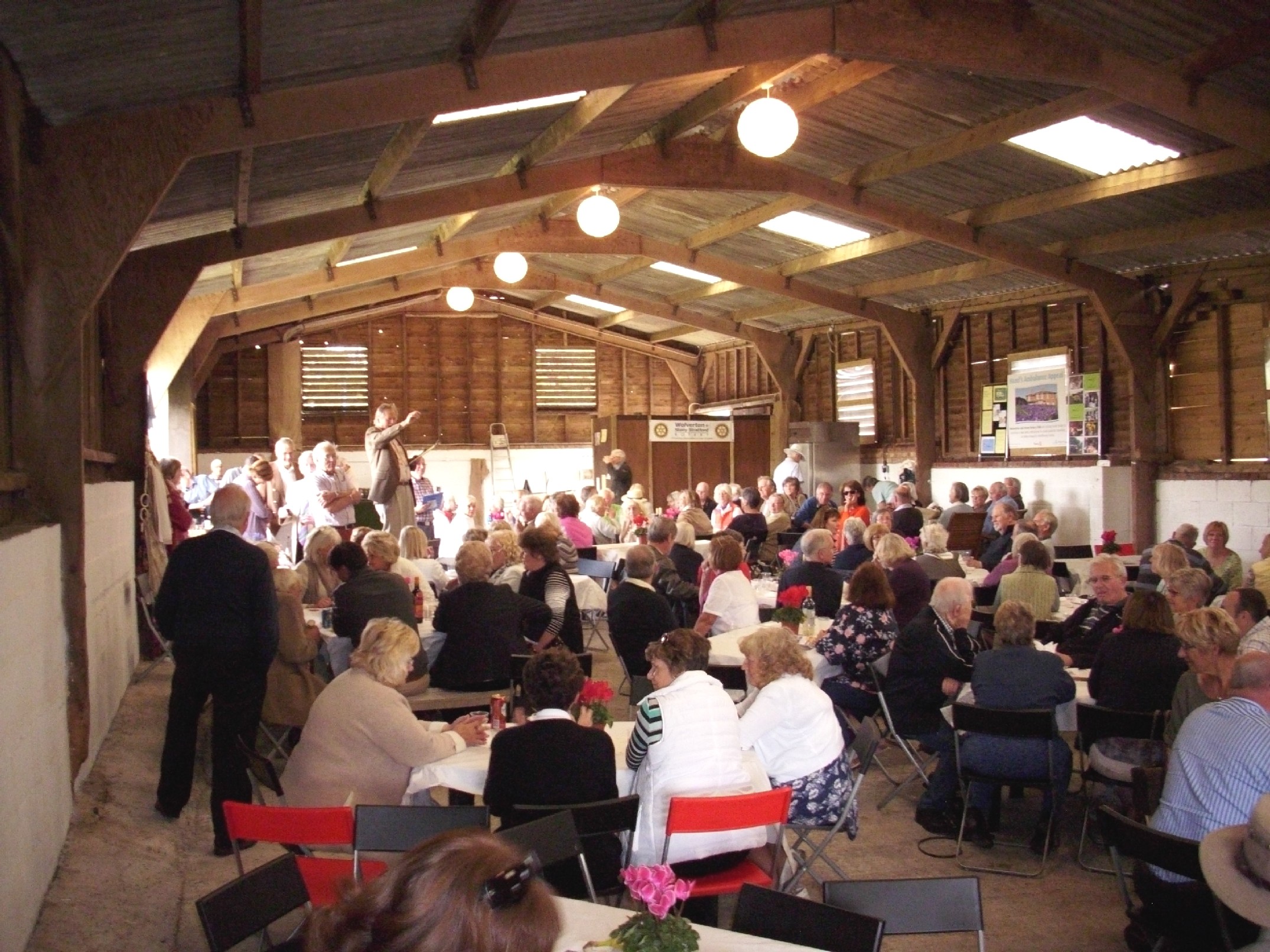 The event was in aid of our appeal for Willen Hospice. This was one of a series of events to raise £34,000 to provide a new ambulance for Willen Hospice in memory of Rotarian Brian Stuart's wife, Hazel. With very grateful thanks to our hosts, Mr & Mrs David Samsome, our generous sponsors, our guests and our hard working club members.

Thank you to the pupils at Radcliffe School for their generous donation of over £260 for our ambulance appeal, raised at several fundraising events at the school.

Thank you to all our other donors

Thank you to all our other donors, too numerous to mention here, whose contributions totalled over £9,000.